× FINAL DAYS to Kickstart the Before You Go graphic novel!

A monthly digital magazine of comics, prose and audio 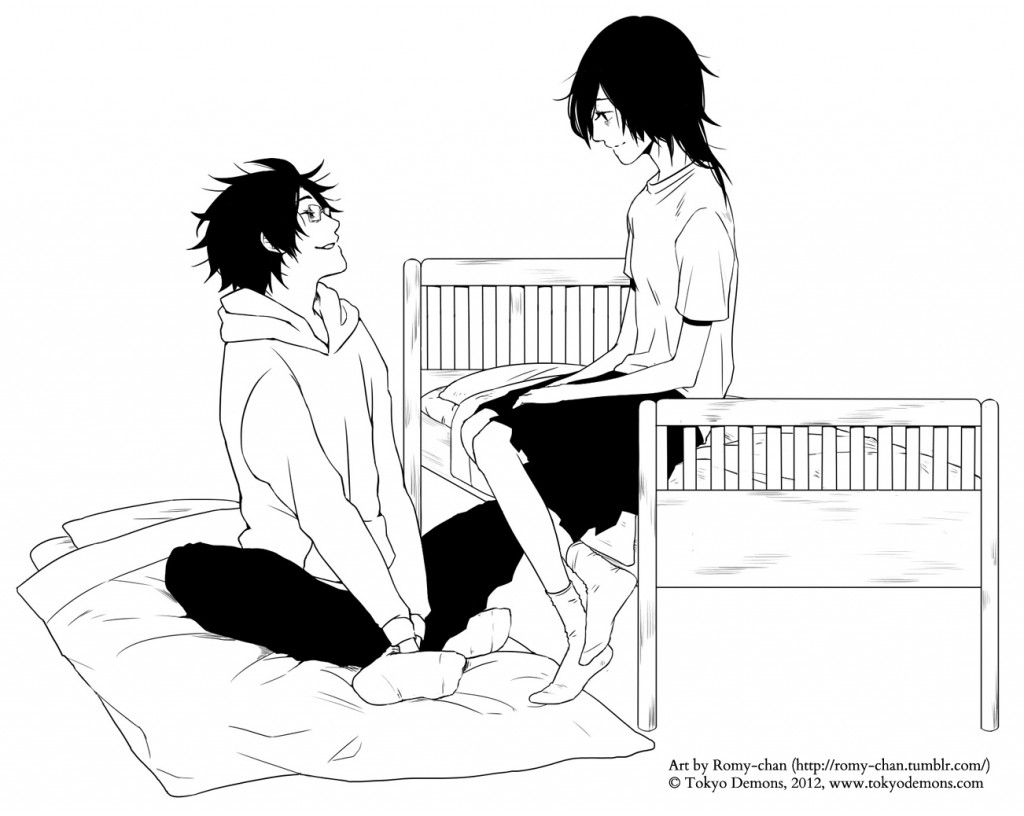 Note: You can also see the short stories on the Tokyo Demons Timeline.

Once: Sachi’s perspective, summer of 2000. An eighth-grade Sachi tries to reach out to his troubled classmate Kado…and discovers he’s in over his head. (Available in official eBook/PDF and hard copy versions of Book 1. Click here for preview.)

Twice: Mitsuko’s perspective, summer of 2000. Mitsuko and Miki, dealing with the aftermath of Takeshi’s disappearance on Byakko, find a weird understanding in their shifting body images. (Available in official eBook/PDF and hard copy versions of Book 1. Click here for preview.)

Miki Date CD (audio): A Kickstarter stretch goal determined by vote, this second-person audio drama brings the gender-neutral listener on a horrible date with Miki, where he talks about his relationship with Mitsuko and his parents in-between constant cursing. NOTE: Not Safe for Work without headphones, due to coarse language and a make-out scene.

Press START to continue: Adam’s perspective, 1981-2001. The child of two soldiers largely raised by his grandmother, Adam turns to martial arts and video games to fight his inner demons. (Stretch goal from the Book 2 Kickstarter, Adam won the reader poll.)

Hang in There, Kiyoshi-kun! (Kiyoshi’s adventures in being an idiot)

Building up: Ayase’s perspective, Book 2. Ayase’s feelings for Kiyoshi haunt her at night. (Adults only, available in the Sparkler Shop. Click here for preview.)

Never again: Sachi’s perspective, the year 2000 (several months after Once). Sachi’s first serious girlfriend worsens his confusion over Kado–and his confusions about himself. (Adults only, available in the Sparkler Shop. Click here for preview)

A preview short story of the series after Tokyo Demons: Book 3. (Coming summer 2014, after Book 2. Stretch goal from the Book 2 Kickstarter.)

Stretch goal from the Book 2 Kickstarter: In an earlier poll, readers were asked to submit one story idea of LITERALLY ANY REQUEST: hinted canon, alternate universe, off-screen make-outs, Jo Gets Laser Eyes, etc. We put the ideas to a vote and Lianne will be forced to write out the winner, no matter how ridiculous. Winner: Tokyo Demons sports festival and Fight Club, which was suggested anonymously by our #1 fan Norma! She seriously knows this series and its readers, whoa. (Coming summer 2014, after Book 2.)

All content on this site © Chromatic Press. Nothing may be copied or used without permission
Terms & Conditions | What is Sparkler Monthly? | Jobs & Submissions